10 of the Most Beautiful Places to Visit in Ireland

Ireland truly has a reputation for being beautiful and undisturbed with an abundance of green and dramatic cliffs that reach down to picturesque beaches and a clear sea. If you really start looking around this fantastic country you will discover charming little villages and friendly locals who are always eager to share their tips on the best bits of Ireland. Many of our guests at O’Callaghan Hotels Dublin already know what they want to see when they come to Ireland and often they already know about the best places and not to miss attractions. But when it comes to the best of the best, these destinations may be the most spectacular of all.

The Cliffs of Moher are one of Ireland’s most iconic, and most visited natural attractions. These breath-taking cliffs hang some 700 feet over the Atlantic Ocean and also offer some of the most amazing views of the country.

The Ring of Kerry is a 120-mile tourist trail in the Southwest of Ireland. The predominantly coastal Ring starts and ends in Killarney, a historic inland town set just outside the oldest protected wilderness in the country, Killarney National Park – another place which should be on your bucket list!

Glendalough, Ireland’s “Valley of Two Lakes,” rests in a glacial valley in the heart of the Wicklow Mountains. On a visit to Glendalough, you will have the opportunity to explore a natural and undisturbed area of Eastern Ireland. The area is also renowned for hiking and hill walking opportunities all year round and a particular treat is in the winter time if there is snowfall as the entire area becomes even more picturesque!

Brittas Bay is one of the most beautiful beaches that Irelands East Coast has to offer. Boasting not only great sand, clean water and an abundance of space, Brittas Bay is also a recipient of the Blue Flag which makes it a safe place to take your family on a day out. With more than three miles of white sand dunes and magnificent stretches of clean sand and calm waters, Brittas is ideal for swimming at any time of the year if you are brave enough! The dunes are also home to a unique range of plants, birds, foxes and rabbits which have made the dunes their homes, just another point which makes this an important stop-off point on your trip around Ireland. 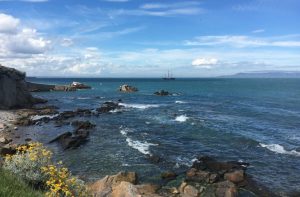 The Boyne Valley which is located not far from Dublin is very well known for its never-ending green landscape dotted with passage tombs, monastic ruins and home to Trim Castle, famous for its role in Mel Gibson’s “Braveheart.”. This is also where you’ll find Newgrange, one of the finest examples of a passage grave in all of Western Europe, and Ireland’s most renowned pre-historic site which dates back to 3000 BC – before Stonehenge and even the Great Pyramids in Egypt!

The Giant’s Causeway, although actually in Northern Ireland is one of the Earth’s best-kept secrets. Located next to the wild North Atlantic and a landscape of soaring cliffs, this coastal area is made up of about 40,000 basalt columns. Created by a volcanic eruption that took place some 60 million years ago the Giant’s Causeway remains a wonder for many but continues to astound most!

Connemara is one of the most beautiful, unspoiled destinations in all of Europe. Located not far from Galway City, Connemara is filled with a wide array of colours and beautiful wilderness areas that include everything from bogs and lakes to golden beaches and mountain views. Connemara is a place where nature has truly taken over, a relaxing retreat of unspoiled beauty.

The Copper Coast Road is a stretch of road along the South coast of Ireland that runs between Tramore and Dungarvan in County Waterford, passing through six small villages that showcase glorious views of towering cliffs, idyllic sandy coves and caves under the shadow of the Comeragh Mountains. The Copper Coast is an attraction in itself with many touristic farms and breweries now along this famous route. The drive is filled with panoramic views of the sea and wild countryside as well as a number of blue flag beaches like Bunmahon and Clonea which are the perfect spots for some swimming in the sunny South East of Ireland.

Kilkenny is a beautiful city which is both medieval and modern, with narrow, winding streets and ancient buildings combined with the progressiveness of a lively city and a hub for Ireland’s arts and culture. Kilkenny has so much to offer the modern traveller but retains its heritage which can be seen in the many city centre attractions which include the amazing Kilkenny Castle located at the heart of Kilkenny City. Check out this great guide of things to do in Kilkenny from Smithwick’s – and it you’re a fan of the Kilkenny red ale pop in to tour the ‘Smithwick’s Experience’ brewery.

Built over 600 years ago by one of Ireland’s greatest Chieftans, Blarney Castle is a nod to the Irish history as well as an iconic Irish visitor attraction. Blarney Castle has become a big draw for Cork in previous years making it a world landmark. At Blarney Castle, you will find the Blarney Stone which is a legendary stone of eloquence – Kiss it and you’ll never again be lost for words!

Many of these beautiful places are quite a journey from O’Callaghan Hotels Dublin, however, Dublin is very well connected to these areas and you can hop on a bus or a train to any of the above-mentioned destinations. If you would like to know which are the ones that you should really do while on a short visit to Ireland then why not ask a member of the reception team at O’Callaghan Hotels. Our reception teams know Dublin and Ireland very well and would be delighted to point you in the right direction to ensure that your visit to Ireland is a memorable one.