Dublin Open-Top Bus gets a Facelift as DoDublin 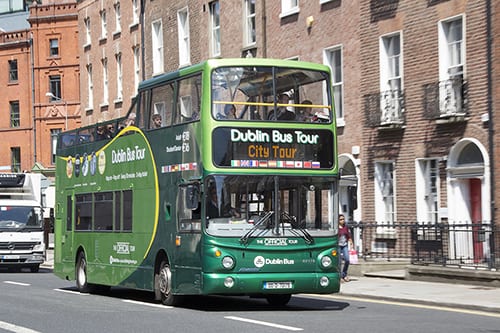 The Green Bus, operated by Dublin Bus services focuses on Dublin Sightseeing City and Coastal Tours and has been a well-known constant around Dublin city centre since 1988. In recent times, the Green Bus, Dublin’s original open-top bus service has been shaking things up buy rebranding to DoDublin. This brand change was a relatively simple choice as this bus has been “Doing Dublin” for many years now and wanted to incorporate it into their identity. The Green Bus runs all around Dublin city centre and the closest stop to the O’Callaghan’s; The Green Hotel would be stop number 12 just outside the Little Museum of Dublin which is just off St Stephens Green Park. If you are staying in one of the hotels near Merrion Square Dublin then stop number 9 is located just outside the O’Callaghan’s; The Davenport Hotel so perfect if you are staying there or in the Alex or Mont Clare Hotels.

The DoDublin brand is a really special one and is made up of very special drivers with a wide knowledge base with the best tips throughout the city. Being an iconic bus service in Dublin for so many years means that there are certain expectations and knowing the city inside-out comes as standard. This means that the DoDublin team are able to create very special experiences for their guests. They go into detail on the culture, heritage and most important some of the key characters – you may even get a first-hand story or a song out of some of the locals if you ask!

One key point for anybody who would like to become a DoDublin driver is that they need to be a Dublin native or have lived in the city for years and know it in extreme detail. All of the drivers are trained by Failte Ireland and know every anecdote and local tip for the fair city of Dublin. The bus drivers certainly get around clocking up almost 250,000 miles per year and interacting with 2.5 million customers each year. Another key point which is extremely important for any Green Bus driver is knowing the best of the best in Dublin. Some of the key questions which often crop us on the buses are:

And the list goes on and on! Apart from knowing lots of “useless” information, it is also key that the Green bus drivers know some really important facts about their fair city such as; Why the Irish harp faces left on government buildings but right on Guinness products? How Dublin lost track of time? Did you know that when Dublin Mean Time was in place until 1916 and we were over 25 minutes ahead of GMT in London;

Another piece of key information which drivers need to have on hand for curious visitors is their own favourite places within Dublin – these are sometimes the usual tourist attractions and other times really specific personal places which the bus drivers hold precious. Some of the places include;

The DoDublin buses are very easy to spot with their bright green colour – they stop at various points throughout the city and you can hop on wherever you like. You can avail of the best value with a DoDublin Card which costs €33 for adults and €16 for children under 14 it offers unlimited travel for three days, including direct transfers to and from Dublin Airport on Airlink Express, The Hop On Hop Off Tour, and all public buses on Dublin Bus routes. These tickets can be purchased at the airport, online and from one of the many DoDublin team members spotted around the city in the green jackets.

Tickets for The Hop On Hop Off tour which cost €22 per adult when purchased from the website and includes free for kids (two under 14 with a fare-paying adult), a free Pat Liddy Walking Tour of Dublin worth €10, free entry into The Little Museum of Dublin at St. Stephen’s Green worth €7, and two for one meal deals and discounts at participating attractions.

For further information on tickets and tour times visit www.dodublin.ie and remember that if you are staying in either the O’Callaghan Stephens Green Hotel or any of our hotels near Merrion Square Dublin then there are stops very close by which make it the obvious choice if you would like to see Dublin at its best with some of the best tour guides around.